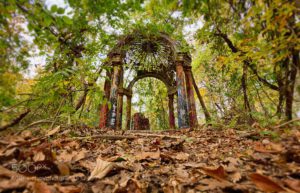 I spent a day hiking and exploring the ruins of Illchester, Maryland. The town was founded around 1870 as a mill town, and included several mills (that remained in operation until 2003), a small group of houses for the workers (most of which are still standing, albeit in rough shape), and a religious school for girls called St. Marys’ School. After being abandoned in the 1970s the school building was dubbed “Hell House” by the locals, and even after being demolished (along with the mills) in 2005, many say the area is haunted. The long steps leading up to the ruins of the school has the words “Welcome to Hell” graffitied on them. The ghost stories get a lot of credibility from the abandoned alters around the property (there are at least three structures that, while they may have originally served a different purpose, now look like abandoned church alters) and the abandoned cemetery, complete with an alter in the middle. The cemetery is completely overgrown, and the alter is in pretty bad shape. It once housed a metal cross, although it now appears that has been stolen. I enjoyed hiking around the area, but I am definitely glad I did it during the day.